This project is supported by a Montana Department of Agriculture Specialty Crop Block Grant.

Codling moth (the “worm in the apple”) in Montana

Codling moth is a major insect pest of apple fruit in Montana. In southwestern Montana, Ravalli County Extension Patrick Mangan estimates 50-60 calls per year from non-commercial fruit growers each year with requests for information; approximately 200 people are signed up for the Ravalli County codling moth alert system.  Sandy Perrin at Missoula County Extension Plant Clinic receives 45-50 calls, and has both a pest alert hotline as well as an additional 47 people on an email alert system. Katrina Mendrey at MSU-WARC fields an additional 30-50 calls from non-commercial fruit growers, both locally and from other growers around the state.  Laurie Kerzicnik at MSU-Bozeman Schutter Diagnostic Lab estimates 5 calls per year.  Commercial management for codling moth requires continued attention to predicted codling moth life stages and multiple pesticide applications, so we sought a simpler method suitable for homeowner-scale plantings.

Testing a method for homeowner management of codling moth

This year WARC tested a simple method of codling moth management suitable for small-scale growers or homeowners with several trees – bagging the fruit with the intent of preventing codling moth egg deposition and subsequent larval damage to fruit.  Other university extension programs in the United States have published documents indicating this method can successfully reduce codling moth damage to an acceptable level and eliminate the need for sprays.

Twelve percent of bagged fruit sustained codling moth damage compared to 35% of unbagged fruit.  It is not clear when infestation of bagged fruit occurred: it is possible that some eggs laid between bloom and bagging, or potentially that the slight gap between the plastic bag and fruit stem was an entry point.

Although the bags reduced the incidence of codling moth, the presence of earwig frass in 53% of the bags makes this method unappealing.  This, combined with initial effort to bag, then to remove the bag with harvest, combined with only partial reduction in codling moth incidence, leads us to seek a superior simple method of codling moth control.  We are considering testing commercially available fruit bags and nylons in 2020.   Please contact Rachel Leisso (Rachel.Leisso@montana.edu) with any suggestions, or if you are interested in testing fruit bagging in the summer of 2020.

Bagging the fruit.  Seventeen trees in the middle row of the old Cortland apple block at Western Ag were bagged on 06/05/19, when fruit were less than thumbnail size in width (less than 1.5 cm across).   Exterior trees on either end of the row were not included.  Fruit were thinned to a single fruitlet per cluster for six clusters per tree and bagged.  No ladders were needed to bag fruit.  Bagging time was recorded and averaged 1 minute 33 secs per fruit among the three people bagging fruit.

Fruit harvest.  Fruit were harvested on 10/02/19 following several nights of below-freezing temperatures, with the lowest at 23 degrees F on the night of 10/01/19.  The last starch-iodine test performed before frost on 09/25/19 indicated fruit averaged 2 out of 8 on the Cornell Starch-Iodine apple maturity scale.  The number of bags remaining on each tree was counted, and the presence of codling moth strikes and earwig frass recorded.  Following harvest of the bagged fruit, the remaining number of apples on each tree were counted and the number of fruit with codling moth strikes recorded. 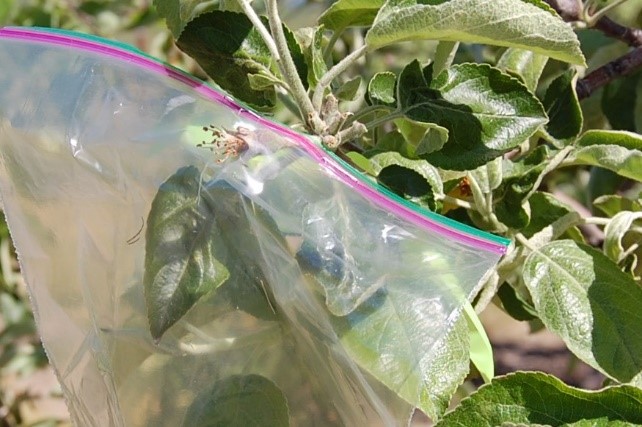 Earwigs in the stem bowl of a fruit and a codling moth exit hole on the side of a fruit at harvest. 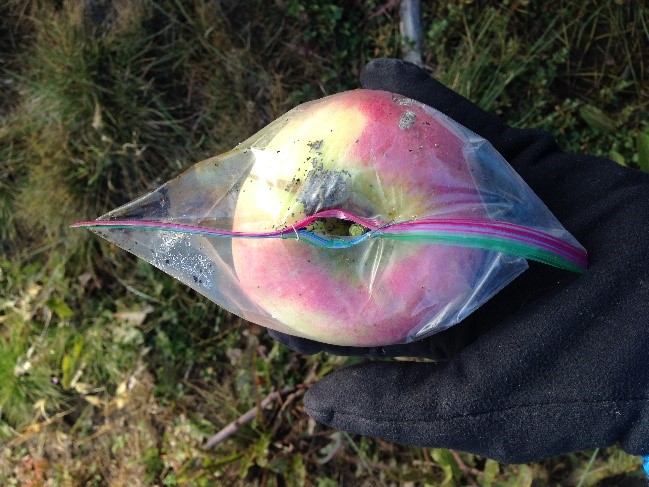 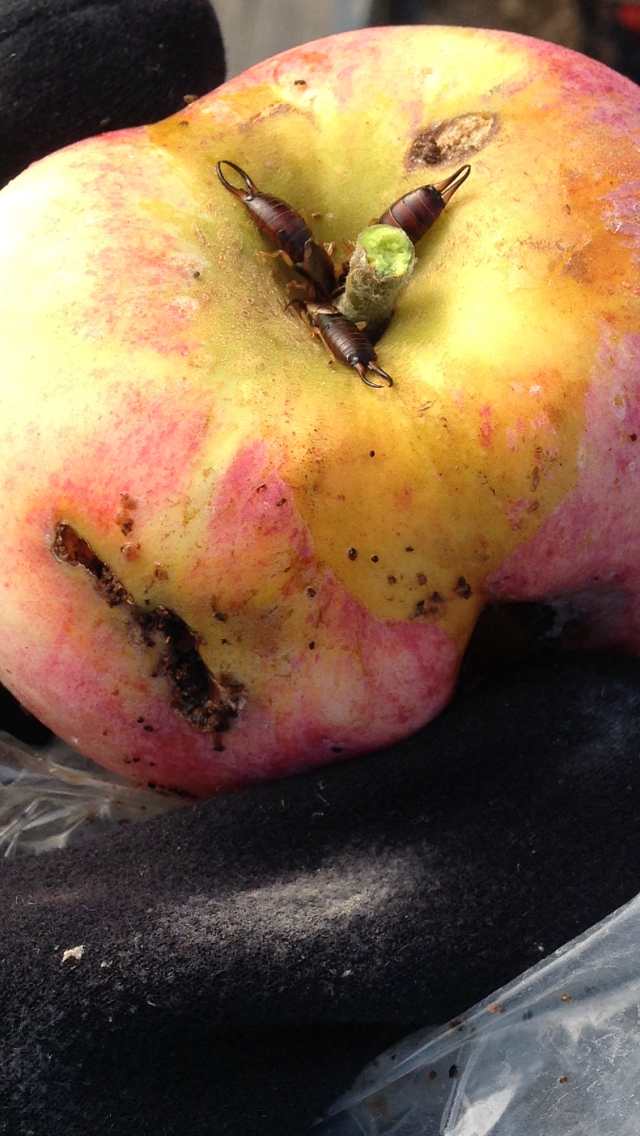 Disclaimer.  The mention of specific products used in this project does not imply endorsement by MSU.

This project is supported by a Montana Department of Agriculture Specialty Crop Block Grant.