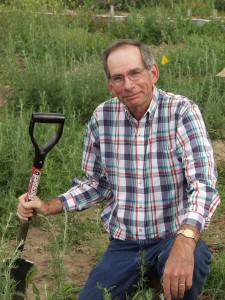 – a summary by Jim Story, Research Professor in Entomology – retired

Spotted knapweed (Centaurea stoebe L. subsp. micranthos), first reported in the state in 1927, infested an estimated 4 million acres of rangeland in Montana by the 1970s.   A 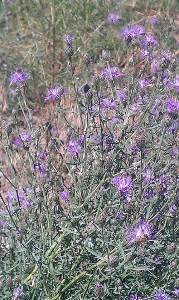 primary reason for the rapid spread of knapweed in Montana was the fact that it was an introduced species and, therefore, lacked the complex of natural enemies, i.e. insects and pathogens that attack the plant, that effectively regulate its population in its native area of Eastern Europe.  Given the expanse of the knapweed infestation and the high cost of conventional control methods, an alternative control method was needed.  A program to use Eurasian host-specific natural enemies of spotted knapweed and other weeds was implemented by Montana State University at the Western Agricultural Research Center (WARC) at Corvallis, MT in 1974.
We were convinced that the successful biocontrol of spotted knapweed would require a complex of natural enemy species.  So, much of the spotted knapweed work in the 1980s was focused on the survey, testing, collection, and introduction of Eurasian natural enemies of the weed.  This effort was very successful and, in 1992, we introduced the 12th and final biocontrol agent species into Montana for spotted knapweed control.  The 12 agents consisted of four seed head flies, three seed head weevils, a seed head moth, three root moths, and a root weevil.
Once the promising natural enemies were introduced, our research focus was on the biology, behavior, life history, establishment success, and dispersal of the insects. Two of the insects, the root moth Agapeta zoegana, and the root weevil Cyphocleonus achates, had slow reproductive rates so we initiated outdoor mass-rearing programs at WARC to increase their numbers and introduce them across the region.  A total of 350,000 Agapeta were reared and distributed from 1988-2005, while about 600,000 Cyhphocleonus were produced/distributed from 1990-2010.  When considering that the rearing efforts began with about 50 individuals of each species, we definitely accelerated the population increase of these two insects.
After 2000, our research focus was on the impact of the introduced insects on spotted knapweed.  In 2004, exactly 30 years after the biocontrol efforts against spotted knapweed were initiated, noticeable reductions in spotted knapweed density began occurring in the Bitterroot Valley, particularly in a 3-mile radius of WARC.  Since that time, spotted knapweed has been reduced to very low levels throughout the Bitterroot Valley.  We determined that the spotted knapweed decline was due to the combined impacts of seven insect species.  The two seed head flies (Urophora affinis and U. quadrifasciata), a seed head moth (Metzneria paucipunctella), and two seed head weevils (Larinus minutus and Larinus obtusus) are reducing spotted knapweed seed production by about 94 percent at sites where the five insects coexist.  The reduced seed production has resulted in a 98% reduction in the spotted knapweed seed bank which has contributed to the decline of knapweed in these areas.  A root moth (Agapeta zoegana) is causing a decline in knapweed biomass and vigor at sites where it is well established.  But, the most dramatic agent has been the root weevil, Cyphocleonus achates.  Multiple-year attack by the weevil is causing mortality to mature spotted knapweed plants.  At some weevil study sites, spotted knapweed density has been reduced by 95 percent.
In summary, the current decline of spotted knapweed in many areas of the Bitterroot Valley is due largely to the effects of Cyphocleonus and Agapeta on mature knapweed plants,and the impact of the five seed head insects on the knapweed seed bank.  Other factors like drought are undoubtedly contributing, but the biocontrol agents have been the primary cause of the remarkable spotted knapweed decline.  We are confident that similar declines in spotted knapweed will occur in other areas of the state once large populations of the effective agents are established.
We also investigated the compatibility of biocontrol with other control methods.  A study to determine the compatibility of two herbicides, 2,4-D and Transline, with the root insects, Cyphocleonus achates and A. zoegana, showed that compatibility was dependent upon application timing.  Applications of the two herbicides in the fall or spring were not compatible with the two insects because the killed the plants at a time when the insect larvae were still feeding within the roots.  A study to assess the compatibility of seed head biocontrol agents and mowing indicated that spotted knapweed should not be mowed at the bolting and flower bud stages if large populations of seed head insects, primarily Urophora affinis and Larinus spp., are present because mowing can result in the formation of new seed heads which escape the insects’ attack, thus allowing greater seed production.
I was also involved in biocontrol efforts against houndstongue (Cynoglossum officinale) and sulfur cinquefoil (Potentilla recta), but these efforts were terminated when all of the tested natural enemies proved to be insufficiently host-specific, posing a risk to native plants.  A biocontrol project I initiated against common tansy (Tanacetum vulgare) in 2008 is ongoing.