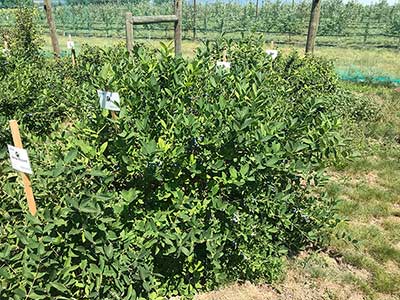 Montana State University has been evaluating 16 haskap varieties for yields, flavor, aesthetic qualities, and cold-hardiness. Eight varieties were planted at four sites across the state (Corvallis-WARC, Bozeman-MSU, Kalispell-FVCC, and Helena) in 2015. At the Western Agricultural Research Center (WARC), eight additional varieties were planted. Each variety was represented at each site by 9 plants (3 plants/block x 3 blocks).

Among the earliest blooming varieties, 'Indigo Gem' exhibited the highest yields, largest average berry size, excellent palatability, and was easily harvestable with a mechanical shaker. All other early-blooming varieties yielded poorly (<1 lb/plant), and were less palatable than 'Indigo Gem'.

The other early varieties have a tendency to break domancy too early for our climates.  Cold damage was observed at the WARC site in 'Blue Goose', 'Sugar Mountain Blue', and 'Wild Treasure' in 2018 and 2020. These varieties broke bud in January-February after a warm spell  Once temperatures dropped again, new growth on these varieties died back. Conditions were cooler at the FVCC site, so 'Sugar Mountain Blue' was more productive (2.1 lbs/plant) than at the WARC site. 'Blue Corn' exhibited a tonic-like aftertaste and performed poorly overall; therefore, it was removed from trials in spring of 2018.

'Aurora' and 'Borealis'—the two mid-maturity varieties—were productive, had excellent flavor (preferable over all varieties), and were very easy to harvest with a mechanical shaker. Additionally, these varieties tend to ripen evenly, resulting in minimal fruit loss prior to harvest.

The varieties developed by Dr. Maxine Thomson in Oregon mature later.  'Tana' and '85-19' have consistently produced the highest yields (35-40 lbs/bush over five years) with good flavor. Some varieties dropped fruit prior to achieving full ripeness ('Taka', 'Kawai', 'Chito', and '85-19'). Others held tight to the fruit ('Tana', and 'Keiko') and required more effort to harvest. ''Taka', 'Keiko', and 'Kaido' have larger berries that are similar in size to University of Saskatchewan varieties. 'Solo', 'Kaido', and '85-19' have relatively sweeter berries that are similar in sugar content to University of Saskatchewan varieties.

Note: OSU plants were larger at planting in 2015 (2 years older) and are still larger than other varieties. This is, in part, why they had higher yields. Numbered varieties are not yet commercially available. We are also evaluating 'Boreal Blizzard', and 'Boreal Beauty', and they produced 2.6 lbs. of fruit per bush in 2020. 'Honeybee', 'Strawberry Sensation', and 'Blue Moose' are planted outside of the trials.

Many of the early-blooming haskap varieties exhibited low productivity (<1 lb/bush over 4 years), averaged relatively small berries (<1 g/berry), tasted unappealing, and were prone to winter injury when warm spells broke dormancy.  'Indigo Gem' performed relatively well for the early variety group. However, it should be noted that 'Sugar Mountain Blue' was more productive in the Kalispell trials than in Corvallis. 'Aurora' and 'Borealis' produced large berries, were easy to harvest, and demonstrated excellent flavor. Many of the varieties sourced from Oregon State University showed strong yields and good flavor. However, these varieties may be best suited for small scale plantings due to their tendency to be difficult to harvest.

An overview of origin and breeding programs—GardenSMART